The classic Pausing Up Down Scroller has gotten more than an oil change, with a complete rewrite that now uses CSS transitions for the smoothest up down scrolling animation possible! Along with mobile optimized performance, the scroller is now also responsive, letting you specify a percentage width that expands and contracts to the parent container’s […] 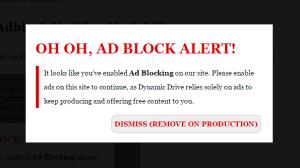 The use of Adblockers is a contentious issue, pitting users against web publishers that rely on ad revenue to fund and run their sites. As part of the later group, whatever your tolerance level of Ad Blockers are, it’s important to at least have an idea of how wide spread Ad Blockers are being used […]

Google Feed API, which powers several RSS Related Scripts on Dynamic Drive, is officially slated for shutdown in just three days (Dec 15th, 2016). In light of this, we’ve updated the affected scripts to use Yahoo’s YQL instead.